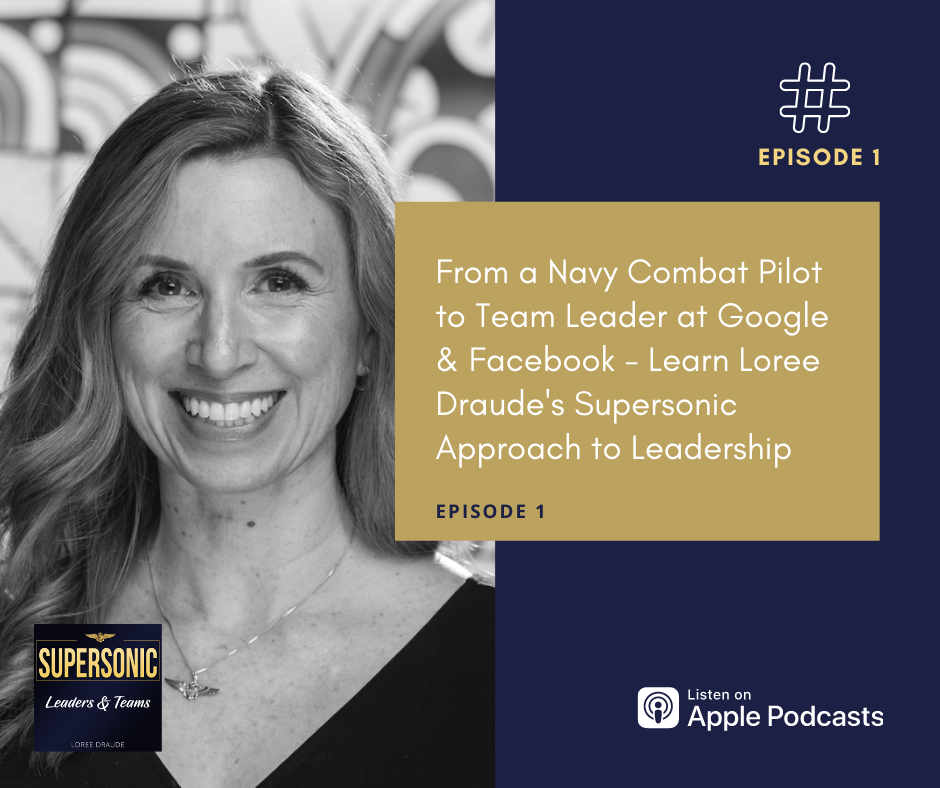 Hello, welcome to the Supersonic Leaders and Teams podcast. I’m your host, Loree Draude. And in this inaugural episode of the podcast, I will introduce myself, share my motivation for this podcast and give you a peek into what’s coming next. So let’s start off with an introduction. Hi, I’m Loree Draude call sign ‘Rowdy.’ I served 10 years in the United States Navy as a naval aviator flying jets, including The F-18 Hornet and the S3B Viking. I deployed twice to the Persian Gulf on the USS Abraham Lincoln and the USS Kitty Hawk. Flying on and off an aircraft carrier is pretty amazing. And I’m so grateful I got to do that. But one of the most rewarding aspects of my time in the Navy was serving as a division officer and supporting teams of sailors and my squadrons. I learned a great deal about leadership from managing and supporting teams at a fairly young age and doing so under the stress of deploying on an aircraft carrier. In addition to flying missions in the Persian Gulf, I was also responsible for the well being and development of 30 sailors in the Division I led. Holding that level of responsibility at an early point in my career taught me the importance of being a good leader.

By the time I left the Navy after my required service was finished, I was responsible for the largest division in the squadron; 130 sailors who maintained the Jets we flew. I then decided to attend Business School in order to transition to the civilian world. I earned my MBA at the Wharton School at the University of Pennsylvania, and I spent the last 20 years here in Silicon Valley at a variety of marketing and strategy roles at several companies, including supporting teams at startups, starting my own companies, and leading teams at Google and Facebook. I’ve been fortunate to learn from some of the brightest minds and inspiring leaders during my career. And I’ve also learned from people who struggled to lead their teams. I’ve learned from my own challenges and successes as a leader, which brings me to this podcast.

Why do a podcast about leadership and teams in 2020? Well, I think that if I’d asked that question at the beginning of the year, it might not have been so easily answered. But everything that we’ve been going through with COVID-19 and racial injustice and other issues in the United States, it’s clear that strong leadership is needed. In many of the difficult situations we’re in right now, many of the problems that we’re dealing with could have been avoided or at least mitigated with stronger leadership. So I want to create space for conversations around leadership, what it means, and how managers and people can improve their own leadership skills.

Throughout my career, the part of being a manager that I’ve always loved the most was supporting my teams and coaching people. It’s why I decided to coach people full time. Many of my clients are leaders who don’t have someone to discuss these topics with. I find that I’m often coaching people on their own leadership style.

I was having a discussion about leadership and team building with a friend of mine. It occurred to me that I don’t often have these conversations outside of my coaching relationships and thought ‘hey, it would really be fun to talk with leaders I admire to learn more from them, and hopefully inspire others in their own leadership journeys.’ And I want to clarify something just because you’re in charge, that doesn’t necessarily mean you’re a leader. And just because you’re not a people manager, that doesn’t mean you aren’t a leader.

In one of my podcasts, you’ll hear General Krulak, the 31st Commandant of the United States Marine Corps, talk about how leaders are in the inspiration business. And you may have heard the Napoleon Bonaparte quote, “Leaders are dealers and hope.” I believe that inspiring people to feel hopeful about the work they’re doing and about their future is exactly what leaders do. I mean, they do a lot more than that, too. But the basic essence of a good leader is inspiring people to do something. And just speaking personally, I would love to see a lot more hope and inspiration in our world today. These conversations need to happen more often.

So I’m going to start by having conversations with leaders I admire and is why call this podcast Supersonic Leaders and Teams. Well, I mentioned already that I was a naval aviator, and I’m very proud of earning those Wings of Gold. So I love to use aviation analogies. As someone who has literally been supersonic, I find that the term supersonic evokes two meanings. Obviously, it means getting somewhere faster than the speed of sound. My hope is that this podcast will inspire leaders in some way and accelerate their success. But the funny thing about flying faster than the speed of sound that you might not know, unless you’ve been in supersonic flight is that it’s a lot more exciting on the outside of the cockpit than it is on the inside. The outside observer might hear the sonic boom and see the vapor envelope around the outside of the jet. So you might think that on the inside, we’re like transcending time and space and levitating in the cockpit or something. But on the inside of the jet, the only way you know you’re going supersonic That the Mach airspeed indicator clicks from .982, .99 to 1.0 to 1.1. While Yes, it’s typically a bit louder and more turbulent in the cockpit as the jet pierces the air at such a high speed, there’s no boom moment inside the cockpit like there is on the outside. And bringing that back to leadership and team building, I think sometimes as leaders we want those boom moments where when we have a huge success, and an observer might only see that moment… but we should acknowledge that there was a lot of work in collaboration and effort and doubts and you know, the whole emotional roller coaster that happens behind the scenes. And so I like the term supersonic leaders and teams for this podcast to remind people that you can have that success, but it’s not always obvious to you with the big boom.

Okay, finally what to expect in the podcast. I love talking with leaders about their personal experiences. So you’ll see many interviews, I will also share some of my experiences as a leader in the military and in Silicon Valley. Now, I would never claim to be a perfect leader by any means, but what I am is an enthusiastic and continuous learner, and an advocate for leaders to continue sharpening their skills. And I hope that by sharing some of my stories about my challenges and my failures, as well as my successes, that that will be of inspiration to you as well. And I’m grateful to have this forum to share my thoughts on leadership and team building, as well as the stories of leaders whom I greatly admire. I hope you enjoy these conversations and I’d love to hear from you.

Who would you like me to interview? What questions do you have about leadership and team building? You can always leave me a voicemail at askloree.com

Thank you for tuning in!