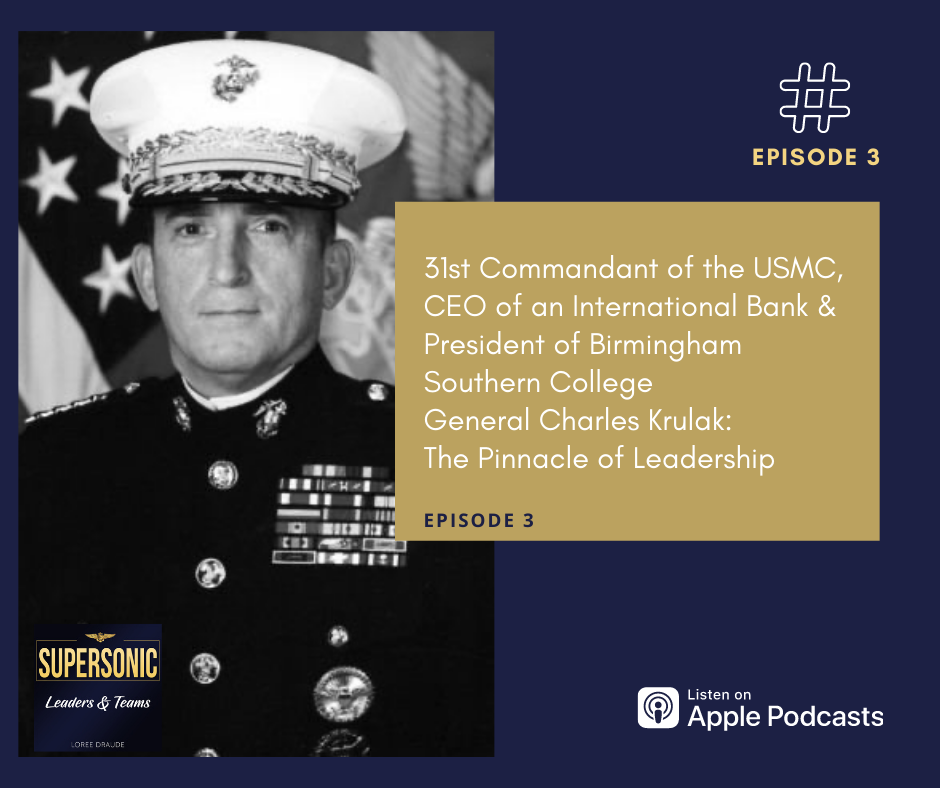 My guest today is General Charles Krulak, the 31st Commandant of the United States Marine Corps. Now, I would love to be able to claim that General Krulak agreed to do this podcast because he was so impressed by my expertise and experience, but I have to come clean and provide the full disclosure that General Krulak and my father, Brigadier General Tom Draude, have been best friends for almost 60 years. And so I’ve been lucky enough to have experienced General Krulak’s wisdom and humor for my entire life. For those who don’t know General Krulak, or maybe about the Marine Corps, I will share that being selected to serve as the Commandant of an elite military force like the Marine Corps means that General Krulak is at the pinnacle of leadership. And what’s even more admirable about this man is what he did after serving our country for 36 years. He continued his service in the public sector, first as the chairman and CEO of an International Bank and then later as the President of Birmingham Southern College. But what I most admire about him is his service as co-chair of the national effort to disrupt the business of modern-day slavery and human trafficking. And as co-chair of a group of 100 Senior general officers, opposing enhanced interrogation techniques, also known as torture. You can probably tell that I’m a huge admirer of his leadership, and I am honored to have him on the podcast.

You know, General, you’ve had a myriad of positions. Obviously, you had the highest leadership position in the Marine Corps as the Commandant. Once you left military service, you were Chairman and CEO of MBNA. You are on the board of directors of several organizations. And then you were the president of Birmingham Southern College. So I’m curious, since you have so much experience, both in the military and as a civilian leader, what do you find is the biggest difference in leadership between military and government organizations, and civilian organizations?

A very little difference. As a matter of fact, I don’t think I changed my leadership style one iota when I went from the Marine Corps to being Chairman, CEO of an International Bank, being on the boards of Fortune 50 companies to be in you know, college President. The same things that enable you to be a leader in the military are the things that people seek in the civilian world. Do you care and concern about your people? A great leader, who I respect, said to me, you know, ‘you can pretend to care, but you can’t pretend to be there.’ And so, you look for the people who if you’re there, as an example, as chairman, CEO of a bank, we had these massive call centers that would, you know, whether they’re looking for credit, whether it’s sales, etc. On the weekends, I would make sure that every Saturday and every Sunday I would go to the call center, and people at the bank would say, What are you doing at the call center? Being there, they understood you did care about it. It wasn’t phony. Be then you got to be a person, a character, they would be able to look at you and say, my gosh, this is somebody I can trust. They’re not worried about who gets the credit. They’re worried about the job getting done and well, they’re selfless. They have moral courage. They’ve got a huge strength of integrity. And all of that makes a difference. If there is any difference, it is not how I responded, but how some of the people who I dealt with initially responded. They were not sure about this little guy coming in here as a former Marine, what are we going to be doing push ups? And it took a while for them to realize he really does care. He is interested.

Their value system may have been a little bit different than mine. I mean, in a bank, it is profit-driven. I mean every single morning I would get to the office and there would be a sheet that said here’s what you’re being outmatched, here’s how many accounts we’ll put on. You know, the whole shooting match. So that causes people to focus on numbers. And it took a while for people to understand that if you treated people with respect and dignity and that you cared about them and that you work with them, the numbers would come. When you treat somebody right, they’re going to bend over backwards to make sure you are successful, and so, you know, I think the only difference would be in that area that they had believed that you were real.

I enjoyed hearing about you visiting the call center as it reminded me of your time in the Marine Corps and when you used to visit the troops or the Marines at Christmas and bring Christmas cookies to them on Christmas Day.

My wife, she would cook we would cook literally hundreds of dozens of cookies. I mean, we get a big van and start at you know, at about 10 o’clock at night and start delivering and go all the way from Annapolis down through to Quantico, Virginia. Just delivering cookies. But yeah, it’s just that simple. What I was trying to signal was I care about you. Same thing at the Birmingham Southern College. Every time we had an exam, we would show up to the library with cookies. So people saw that and they realized, this guy doesn’t have to be out on Christmas Eve, he’s just doing something nice.

Do you think that leaders are born – just born with the qualities to make a good leader? Or do you think that it’s something that is developed in a person or maybe a combination of both?

You know, that’s a question that is asked a lot: are leaders born or made? And the answer is a little bit of both. I mean, the reality is environment. Obviously, when you’re first born, nobody is born a leader, but there’s an environment aspect to it. You know, how you were brought up, with what your value system was when you’re brought up… was critical thinking allowed in your home, etc, etc. So there is an aspect of being born being in to a particular environment that would have an impact. But the reality is, can you teach somebody to be the leader? Yes, if they’re willing to be taught. I mean, they’ve got to be willing to understand the philosophy and to buy into it. I think the leaders can be made and leaders certainly some, you know, get there by environment.

Tune in to the episode to hear more of General Krulak’s sage leadership advice.